1. Mix up your Force Angles to target the Biceps Peak

We all know that using a variety of exercises helps make our arm workouts (and all other weight training workouts for that matter) more versatile and more effective. But, it’s important to understand that simply changing the exercises doesn’t always mean you’re hitting your biceps in a different way.

You see, to thoroughly hit your biceps (or any other muscle group you’re training) you need to mix up the force angles, which changes the point of exercise (within the range of motion) where the muscle(s) is being maximally loaded, within a given workout.

Many lifters are under the impression that each time you change the exercise you’re changing the force angle. But this is not so, as many biceps curl exercises may look different – Example: Barbell biceps curls, EZ-bar curls and dumbbell biceps curls – but they may create the same force angle, which, therefore, hits your biceps in basically the same way.

Here’s a quick lesson on Biomechanics to help you better understand force angles:

During any style of biceps curl with a free weight (dumbbell, barbell or EZ-bar) the point at which your biceps is being maximally loaded (stimulated) is the point in the ROM in which your forearm is at a 90-degree angle with the load vector, which in the case of free-weights, gravity is your load vector.

In other words, when using free weights the point of maximal loading on your biceps (during a biceps curl) is when your elbow reaches 90 degrees of flexion or when your forearm is parallel to the floor.

When doing biceps curls using a cable column, the cable itself is the load vector and the point of maximal loading to your biceps here is when your forearm makes a 90-degree angle with the cable.

The nice thing about the cable column is that you can manipulate the force vector to make your biceps work the hardest in ranges of motion (of the biceps curl) that free weights miss.

Here’s a way we use a cable column to create a maximal force angle at the top point in the range of motion. In this video you’ll see how the 90-degree angle is created much higher in the ROM, which we use to maximally stimulate the biceps at the “peak” of the contraction.

Now, don’t get it twisted as I’m not saying you can isolate out any particular portion of your biceps (upper, middle or lower) when doing curls; you can’t do that with any exercise for any muscle. But, as I’ve demonstrated in the video above, you certainly can manipulate the force angles during exercises to cause the point of maximal loading (on the biceps) to be at different points within the range of motion of a biceps curl.

2. Use an Offset Grip

Basic anatomy tells us that our biceps are not only elbow flexors, but they’re also forearm supinators. Based on this, we’ve found the best way to ensure maximal biceps recruitment when doing dumbbell biceps curls is to hit both (resisted) elbow flexion and forearm supination by holding the handle in a unique way.

Here’s a new gripping strategy we use, which I can promise will give you a much better biceps pump!

Instead of gripping the dumbbell from the middle (in the traditional manner), grip toward the thumb side with your hand as far to this side as possible.

Doing this will force you to resist forearm pronation by using more of your biceps as supinators while you perform the biceps dumbbell curl exercise as long as you perform them in the manner we display in this video:

This biceps protocol has been one our favorites because it only takes 30 seconds to get your biceps swollen and pumped. And, its effectiveness surprises many lifters who when they first see it think it’s “gimmicky” because it’s so different than any biceps training methods they’ve seen before. We then explain to them A) if you always do what you’ve always done, you’ll always get what you’ve always got. And, we also teach them that B) there are three ways to increase muscle: Lift heavy (max effort), lift fast  (dynamic effort) or lift a lot (repetitive effort) – Our 30/60 Biceps protocol combines both moving fast (to create high intensity) and moving a lot (to create high work volume).

You’re going to need a heavy-duty band for this workout. The one I use in the video below is a 1-inch wide “superband.”

If you can’t complete all 60 reps in the given time frame of 30 seconds, the band is too heavy.

Most lifters are already familiar with the classic biceps training method of using biceps curl 21s, which was popularized by bodybuilding legends like Arnold Schwarzenegger and adopted by virtually every young lifter looking to get bigger biceps. We developed our Performance U 28s rep protocol as a way to take 21s concept to create more time under-tension, a better biceps pump and add a new twist to classic method.

If you don’t already know: Biceps 21’s are where you perform 7 reps of partial range biceps curls going halfway down. Then you do 7 partial reps only going halfway up. Then, you finish with 7 more reps using a full range of motion. Totaling 21 reps.

How to Do the Performance U Biceps 28s Protocol

Perform the following four biceps curl variations seated, standing, or on a preacher bench (using either a barbell, dumbbell or EZ-bar) back-to-back, without rest:

Now, there IS a method to the madness behind the way we perform our Biceps 28s protocol, which is based on the Force Vector concepts I shared earlier.

Here’s the thought process we used to designed our Biceps 28s protocol:

We begin with the most difficult part of the range when you’re most fresh.

The first 7 reps serve as a nice pre-fatigue before we hit 7 full range of motion reps. Plus, getting some movement started from the bottom can help you power through the end range you just focused on in the first 7 reps.

Muscle mechanics dictate that our muscles are strongest in their mid-range. That’s why we do an isometric hold in this range for 7 seconds. Plus, isometrics are a great way to increase time under tension. And, help bodybuilders better hold flexed positions, which is what they have to do when they pose in competition.

We finish with the easiest part of the exercise at the end, when you’re at your weakest and most fatigued from the previous 21 reps.

Now, what I’ve just explained is certainly not the one and only “magic order.” Occasionally, to create training variety, we’ll mix up the order a bit and perform our Biceps 28s like this:

Of course, these are all done in the same manner as the above, back-to-back, without putting the weight down.

One of the fundamental concepts in muscle physiology is the length-tension relationship, which is: how much force a muscle can generate relative to its length.

As you can see in the chart below, muscles tend to have the lowest potential to generate force when they’re either fully elongated (stretched) or fully shortened (contracted). And, as I stated above, muscles tend to generate the highest possible force in the middle — halfway through the range of motion (aka. The mid-range).

Not only are muscles able to produce the most force in the midrange, they also have the potential to activate the highest percentage of motor units. (A motor unit is a nerve cell and the set of muscle fibers it’s responsible for activating).

Put simply, more motor unit recruitment means you’re able to bring more muscle into the game on each rep, provided the effort is high enough, as shown in the following graph. 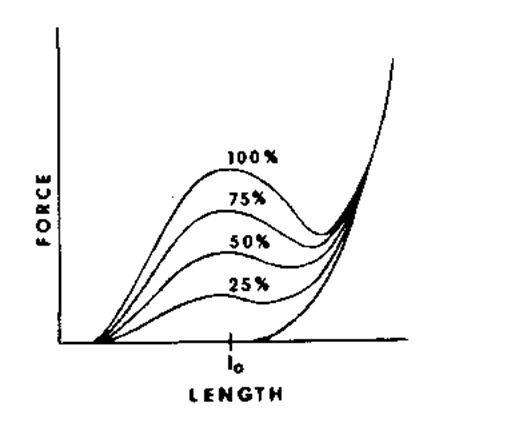 Now that you understand that muscles produce the most force in the midrange, where they also have the potential to activate the highest percentage of motor units, you can better appreciate how to exploit these concepts and transform exercise science into practical exercise application with what we call Constant Tension Mid-Range Biceps Curls.

Instead of doing full range of motion biceps curls (standing with Dumbbells, a Barbell for an EZ-Bar), we begin from a 90 degree elbow bend (i.e. the mid-range) and perform partial rep curls in the middle of the range.

In other words, with elbows by your sides, you perform biceps curls without ever fully going to the bottom or the top of the range of motion.

We prefer to do our Constant Tension Mid-Range Biceps Curls for time instead of for reps, as it doesn’t matter how fast you move because you’re always under tension and using a timed interval ensures that you get our desired time under tension, which is 40 to 60 seconds, regardless of the tempo you perform each mid-range curl at.

The traditional biceps exercises we all know and love are still just as great and effective as ever before. Heck, most of the biceps training strategies I shared above are simply new twists on classic biceps building concepts. While we embrace old-school wisdom, as you’ve seen, we also use some new school biceps building protocols, which you can now to add to your own biceps-training toolbox.

Coach Nick Tumminello has become known as “the trainer of trainers.” He’s the owner of owner of Performance University International, which provides practical, No B.S., personal trainer continuing education.

Nick lives in Fort Lauderdale Florida were he trains a select group of clients and teaches mentorships. Check out his DVDs, seminar schedule and very popular hybrid fitness training blog.